Knife bayonet for use with the 5.56 mm. NATO caliber CETME Model L assault rifle, a Spanish variant of the HK33.

The CETME Model L bayonet's blade is patterned after the U.S. M4 bayonet-knife, but is 2.25 in. (57 mm.) longer than the more common H & K G3 bayonet. It has an 11–groove green plastic grip. It has a broad plain crosspiece secured by two domed rivets, similar to the Rheinmetall G3 bayonet. The blade, guard, and pommel are painted black. The scabbard is closely patterned after the M1964 scabbard.

The CETME Model L bayonet was produced by the state-owned Santa Bárbara Sistemas factory, under auspices of the Instituto Nacional de Industria (INI). 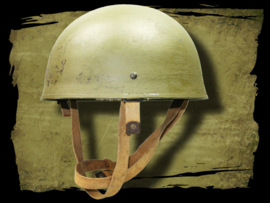